Winner of 2019 CCF ACT Earth Award Project $10M – $30M Winner MBA Building in Excellence Award 2019 Civil – Other Due for completion in late 2018, there are two parts to this significant project; Construction of two wetlands in the existing Isabella pond as a part of the ACT Healthy Waterways scheme and the widening of the existing labyrinth wall weir forming the dam wall for Isabella pond. The aim of the Isabella Ponds Wetlands project is to improve the quality of the water at both the incoming pond areas as well as the outgoing water into the Murrumbidgee River system; the wetlands ponds will create a haven for flora and fauna. The weir is being widened to allow for higher flows, thus greatly reducing the risk to downstream stakeholders of Tuggeranong. The additional flow capacity of the weir also reduces the risk of damage to the Drakeford Drive Bridge. The key activities of the new upgrade include the demolition of the exiting abutment and labyrinth wall and then the reconstruction of the reinforced concrete structure. Constitution Avenue Upgrade 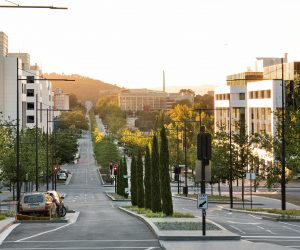 Constitution Avenue Upgrade completed in December 2016, a gift funded  by the Australian Government in celebration of Canberra’s Centenary that has resulted in a vibrant, mixed-use, tree-lined grand avenue with enhanced public transport, cycling and pedestrian infrastructure. The reconstruction of the almost two kilometres of the heavily trafficked avenue in the middle of the city has resulted in a multiple award winning piece of infrastructure which incorporates landscaped pedestrian places with enhanced lighting, street furniture and wide pedestrian zones for people to move and meet. Dedicated bus lanes and bus priority at intersections as well as segregated cycle lanes all help promote sustainable transport along the avenue and incorporating advanced tree plantings, instantly take away the harshness of the city landscape around it.       John Gorton Drive 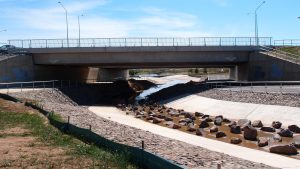 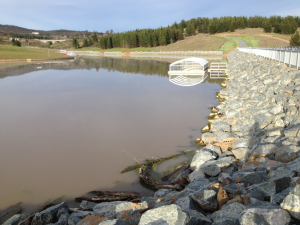 The Molonglo Valley urban development Stage 2, which is expected to accommodate approximately 55,000 residents over the next 30 years, required various preliminary infrastructures. The Cravens Creek Water Quality Control Pond has formed part of that infrastructure, acting as an intermediary between the Molonglo River and the potential overland flow of the surrounding residential developments. Key components of the Cravens Creek WQCP construction include the embankment – constructed as six tier, layered earthen dam with materials ergonomically sourced from onsite excavations, the primary spillway – a 500m3 cast in situ concrete spillway comprised of an intake tower, outlet conduit and steel arch inlet cover, internal drainage point for future maintenance and concrete stilling basin with surrounding gabion mattresses and walls designed to ensure dissipation downstream of the spillway. The WQCP has been designed to withstand and manage discharge rates up to the design 5 year ARI event and convey peak flows up to the 20 year ARI event through the primary spillway. To account for greater ARI events a secondary spillway has been constructed in the form of a grassed channel to attenuate the flows from 20 year ARI event up to the 10,000 year ARI event.  The project was completed in 2016. Googong Bulk Water Offtake 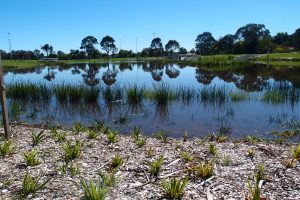 The project involved the construction of the Lyneham & Dickson Wetlands and associated works including pump stations. Completed in 2012, the project involved the construction of the Dickson & Lyneham Wetlands and associated works including pump stations. The Lyneham & Dickson Wetlands were part of a suite of wetlands to be constructed in the Sullivans Creek Catchment. The wetlands consist of a large landscaped stormwater retention basin at both sites complete with inlet and outlet structures and a pump station, with the future aim of harvesting the stormwater and using it to water the local sporting fields.  The pond area includes shared paths, new pedestrian footbridges and the realignment of the main community footpath route. The main purpose of the Lyneham & Dickson Wetlands project is to provide water quality improvements, water for irrigation, increasing aquatic and terrestrial habitat in urban areas and creating recreational, volunteering and educational opportunities.   Tharwa Bridge Upgrade Stage 2 – Substructure and Approach Spans Strengthening 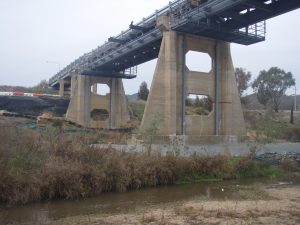 Completed in 2010, Tharwa Bridge Upgrade stage 2- Substructure and approach span strengthening project involved strengthening the 115 year old bridge as part of an overall project to restore the bridge to its former glory and increase its load bearing capacity without affecting its heritage value. The project involved a number of factors making it “more than a simple construction job” because of the heritage value, the environmental factors associated with working over flowing water, and emotional impact as the bridge is an iconic structure deeply embedded in the Tharwa community psyche. The work involved strengthening 5 existing concrete pier foundations by way of jet grouting and ground anchors, strengthening the remaining 6 piers via carbon fibre straps to the head stock and replacement of both abutments including foundations. Strengthening the approach spans was achieved by installing additional steel girders for spans 1 to 5 and 10 to 12.     National Arboretum Canberra, Central Valley Earthworks 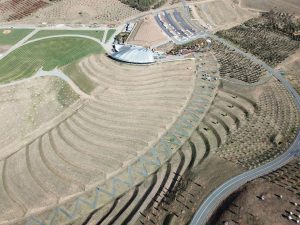 Completed in 2010, the construction of the Central Valley, an 8 hectare  section of the National Arboretum Canberra project, where a series of 36 earth terraces down the side of a hill create a dramatic public garden of international interest. The construction team, Guideline ACT, brought its engineering expertise to a large scale work of art ensuring the design intent was delivered, constructing the terraces to sound engineering principles.           Cotter Dam Remedial Works Cotter dam, a mass concrete gravity dam, was constructed in 1912 and was raised in 1949. Concerns about ageing and structural integrity of the dam were broached as early as 1967 and with the revision to the probable maximum flood and earthquake requirements of 1 in 10,000 years, plus the proximity to a popular recreational resort, the decision was made to strengthen the dam. The aim of the Cotter Dam Remedial Works project was to strengthen the wall of the mass concrete gravity dam by replacing the top of the existing wall. 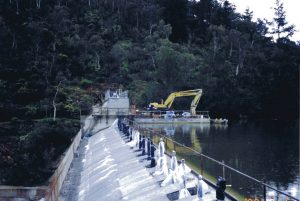 Scope of works: The Cotter Dam Remedial Works construction is a signature project for Guideline ACT. Completed in 1999, it was an innovative, difficult and dangerous undertaking, involving an inventive approach to construction and a high level of detail and control. This is the calibre of project Guideline ACT has built its reputation on.